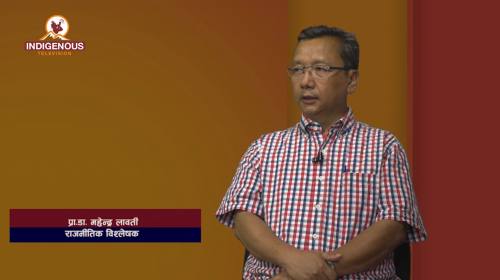 There is likely to rise ethnic-conflict in Nepal says Prof. Dr. Mahendra Lawoti while talking to Jagat Dong in Indigenous Talk, a talk shows of Indigenous Television. According to him, government has not yet addressed the rights of minorities groups of Nepal. Majority of populations in Nepal are still discriminated economically, politically and historically. There is disparities in terms of access to education, services, participation in the civil services and so forth.  Take an example why Chief Secretary, Joint-Secretary are only from Bahun and Chhetri community alone? it is just because minority groups are systematically excluded in the civil service exams.  #ethnic-conflict, #prof. dr. Mahendra Lawoti,

Dr. Mahendra Lawoti is a professor in the Department of Political Science at Western Michigan University. Lawoti is also a regular contributor for various newspapers including The Kathmandu Post, Kantipur Dailies, an article editor for Sage Open, a board member of the Midwest Conference on Asian Affairs and advisor to several non-profit organizations in Nepal and the USA. He served two terms as the president of the Association for Nepal and Himalayan Studies from 2006 to 10 and two terms as Associate Fellow of Asia Society from 2006 to 2012.

His research covers democratization, political institutions, ethnic politics and socio-political mobilizations in Nepal and South Asia. He has authored, edited and co-edited dozens of books and published numerous journal articles, book chapters and opinion pieces. Some of his popular books are "Towards a Democratic Nepal", "Nationalism and Ethnic Conflict in Nepal" "Government and Politics in South Asia" "Pahichan and Sanghiyata" and so forth.
Besides, he has published articles in Asian Survey, Commonwealth and Comparative Politics, Democratization, Himalaya, Journal of Democracy and other journals and chapters in numerous books. Lawoti has conducted field work in Nepal, India and Sri Lanka and has lectured in various countries in Europe, East Asia, the Middle East, North America and South Asia and has been interviewed by media from Australia, Europe, Middle East, East Asia, South Asia and North America.Read more at: https://www.indigenousvoice.com/en/indigenous-experts/5/prof-dr-mahendra-lawoti.html

Voices on the web

Voices on the air

NOT FOR PROFIT ORGANIZATION